The perfect place to get to know Tanzania

Arusha itself is a dusty, charming mid-sized African city. Its population is embodied by a vibrant mix of over 100 nationalities. A melting pot of Swahili, Masai, Hazdabe and numerous other ethnic and indigenous cultures. Living peacefully side-by-side locals are super friendly and eager to show you their Tanzania. To us, it seemed like a city stuck between traditions and modern life.

The clock tower with its visible landmark is considered Arusha’s center. It might not strike you as significant at first, but It is actually the mid-point in Africa between Cairo, Egypt, and Cape Town, South Africa! Arusha is by now means a breathtakingly beautiful city, but it is definitely worth to be visited and felt.

Our time in Arusha was so significantly impacted by our wonderful host Massai, his family, and Papakinye. We quickly bonded and became friends. With them, we were able to discover Arusha through the eyes of locals.

Laying below Mount Meru, the tourism capital is an excellent starting point for safaris. From the center of the “Northern circuit,” you can easily venture out to Arusha National Park, Mount Meru, Ngorongoro Crater National Park, Masai Mara, Serengeti National Park, and Tarangire National Park. Visitors on a quest to see the “Big 5” find plenty of safari operators to choose from.

THINGS TO DO IN ARUSHA

Meet the Big Five on a safari

Shop at the Masai Market

Dive into local nightlife and dance to Afrobeats

After we explored Arusha with Papakinye, we decided to go ahead and book a safari. It’s easy to book your safari in Arusha as many safari tour operators have an office there. The offices are located close to the clock tower. Walk around, check offers, and ask questions. You’ll surely find the perfect safari for you. We have already spent way more time in Arusha than planned and added a trip to Lake Natron, so we decided on a budget-friendly safari day-trip. Tarangire National Park seemed to be the perfect safari for us.

Both, Arusha National Park and Tarangire National, are perfect for a day trip. Tarangire has the highest population density of elephants. We booked our safari with the local provider “African Travel Tour“. Click here if you want to follow the tracks of the Big 5.

The market has been recommended to us, so we decided to check it out. From roundabout at the clocktower, take “Fire road” about three blocks down. The Masai market is an excellent place to shop for colorful souvenirs. The stall owners eagerly greeted us and invited us to see their products. The prices are negotiable. To get the best price, we recommend buying several times from one vendor. We loved the purses we got there.

Papakinye took us the museum to teach us more about the rare gemstone. We headed to the Blue Plaza on India Street and took the elevator up to the third floor. Tanzanite tour is completely free. We visited a makeshift mine and learned about the history of the rare Tanzanite gem whose name, by the way, reflects its limited geographical origin.
One can only find Tanzanites in one place in the world: a small area just four kilometers wide and two kilometers long at the foot of Mount Kilimanjaro, which makes them a lot rarer than diamonds. The blue/violet gemstone has only been discovered in commercial quantities in the 1960s. It has quickly risen to become the second most popular blue gemstone after sapphire thanks to Tiffany’s.

Despite the tourist attractions and nearby national parks, Arusha is a nightlife haven offering bars, live music, karaoke nights and nightclubs. We loved hanging out at the local bars. On our first night, Massai and Papakinye showed us a club called sky lounge. (It’s supposedly the place to be on a Sunday) The atmosphere was relaxed and energizing with a lot of wild dancing. We seemed to be the only “muzungos” which guaranteed us a lot of attention as everyone wanted to dance with us. A little too drunk to drive boda-boda, we had to take a regular taxi home.

One night, we had a run-in with the local “neighboorhood watch.” A group of young men equipped with sticks. Admittedly, this was a bit scary at first. After some discussion with our friends Massai and Papakinye, the group let us pass. So, if you are indulging in Arusha’s nightlife, do it with your local friends!

How to get there and away:

Quite unusual for us we have booked our flight to Kilimanjaro Airport before our departure to Tanzania. It was much cheaper (1,5 hours; $80 round trip) to fly into Kilimanjaro and take the airport shuttle to Arusha rather than flying into Arusha directly. It’s a pleasant ride from Kilimanjaro to Arusha as we even passed the famous mountain.

The bus station is a little outside of the city center. We only ever saw it after dawn. Bus rides can be rough, but they are worth it. Some of our bus trips felt almost like a safari.

As anywhere in Tanzania, this is the cheapest and often fastest way to get around. It gets super crowded at times, but also an excellent place to meet people. Knock on the wall to “stop.”

They are cruising around everywhere Arusha. It’s obviously the unsafest mode of transport, but we never made a bad experience. It costs around $2 to ride around Arusha.

The best time to travel is from September to October. Not only is the weather pleasant in Arusha (around 27 degrees Celsius), but it is also the best time to go on a safari. During this time, the animals gather around the last waterholes.

The wildebeest migration in the Serengeti takes place from January to March. Check out our safari post to more detailed information.

From April to May there can be heavy rains in Arusha. The roads are partly blocked and traveling in and around Arusha is much more difficult.

How to choose a safari operator:

It’s actually quite easy to book your safari once you get here. With a little desk research and our guide, you are likely to find better deals. Plus, you get to check them out in person before venturing out to a once in a lifetime trip.

If you are spending more time in Arusha, you might feel the urge to refresh in fresh water. We spent one afternoon at the Hotel Impala for 10 000 Schilling each. It felt awesome after some super dry and dusty days!

We always felt very safe. When we walked around we felt like we could move carefree. However, we had a little run-in with the “neighborhood security” one night. Tanzania is generally very safe, but its best to walk with a local friend during nighttime just to be on the safe side.

Want to join the discussion?
Feel free to contribute! 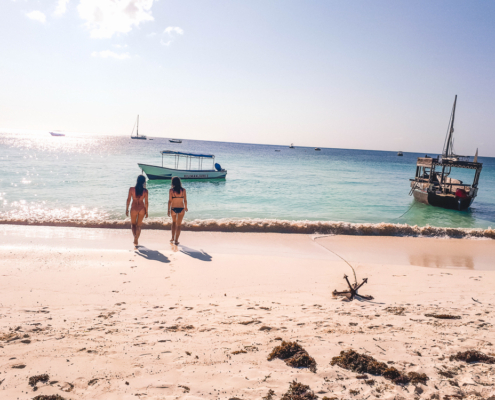 Safari – Do you know the Big 5?
Scroll to top