We met Hans Robert coincidently on our way from the Airport to Nungwi. His name immediately caught our attention.  Hans Robert, a traditionally German name, seemed to be an unusual choice in Tanzania. It turns out the story behind his name is pretty neat. Hans Robert’s father, a former marine engineer, was on a journey back to Tanzania when the ship was attacked by Sadam Hussein. He lost everything with the ship: all his belongings and his earnings. A German colleague emphasized and helped him to overcome his financial predicament. With the help of the German  “Hans”, Hans Robert’s father was able to open a campsite, which profoundly influenced the upbringing of his son.  Out of gratefulness for his supporter, he named his son Hans. It’s actually one of Hans Robert’s dream to visit the family in Germany one day.

Hans Robert grew up on his family’s campsite. From an early age, he was surrounded by different cultures. He observed various lifestyles and took on new perspectives. You can tell how growing up between different lifestyles led him to be empathic and extroverted. We felt like fate has been very “visible” in his life. After his brother died unexpectedly, Hans Robert felt the need to support the widow and children. In his role as managing director of an NGO, he is currently implementing a project which targets women at high risk. It’s a beautiful and super exciting project. If you want to read more, click here.

What’s important to him…

It’s important to Hans Robert to support and enable kids and women at high risk. He believes that consideration and support for one another are crucial for being happy. He aims to make others happy.

Happiness to him is…

Freedom! The freedom to make decisions. The ability to choose a life as he pleases, to follow his instincts and jump on opportunities as they arise.

Come to Tanzania and enjoy everything it has to offer. Tanzania is a country with countless possibilities for visitors. However, Tanzania is also a country where travelers can do a lot for or with local communities. He encourages people to keep their eyes open and support local tourist businesses. Travelers coming to Tanzania have a real chance and enabling and empowering locals.

GET TO KNOW TANZANIA

His name immediately caught our attention. Hans Robert, a traditional German name seemed to be an unusual choice in Tanzania. It turns out the story behind his name is pretty neat.
END_OF_DOCUMENT_TOKEN_TO_BE_REPLACED
https://unique-universe.blog/wp-content/uploads/2018/02/People-of-Tanzania-2.jpg 732 1000 UniqueUniverse https://unique-universe.blog/wp-content/uploads/2019/07/unique_universe_logo-PNG-final2.png UniqueUniverse2018-02-24 19:09:352022-04-09 14:17:58Hans Robert - A modern entrepreneur 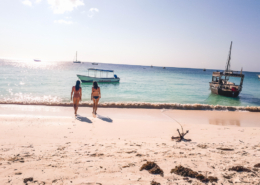 Chapati flatbread is a staple food of Swahili speaking people in Tanzania. Chapati is usually served as a side dish to vegetable or meat dishes. We often had chapati and chipsi mayei for breakfast. Chapati is not only a side dish but also used as a utensil to pick up food.
END_OF_DOCUMENT_TOKEN_TO_BE_REPLACED
https://unique-universe.blog/wp-content/uploads/2018/05/food-culture-2.jpg 750 1000 UniqueUniverse https://unique-universe.blog/wp-content/uploads/2019/07/unique_universe_logo-PNG-final2.png UniqueUniverse2018-05-03 07:41:052022-04-09 14:17:59Chapati recipe - Bread and utensil in one

The polenta-like side dish is popular across Sub-Saharan Africa. What's known as ugali in Tanzania and Kenia is called nsima or nshima in Zambia and Malawi or just pap in South Africa. Whenever we feel nostalgic, we turn to this exotic recipe. Learn how to cook a typical Tanzanian side dish! It's super easy!
END_OF_DOCUMENT_TOKEN_TO_BE_REPLACED
https://unique-universe.blog/wp-content/uploads/2018/03/food-culture-3.jpg 667 1000 UniqueUniverse https://unique-universe.blog/wp-content/uploads/2019/07/unique_universe_logo-PNG-final2.png UniqueUniverse2018-03-28 16:22:062022-04-09 14:17:58Ugali Recipe - the Tanzanian side dish

Chipsimayei was one of the first dishes we ate in Tanzania. As you travel through Tanzania, you are guaranteed to find the dish on every corner. It’s basically an omelet with french fries.
END_OF_DOCUMENT_TOKEN_TO_BE_REPLACED
https://unique-universe.blog/wp-content/uploads/2018/01/Chipsimayei.jpg 677 1024 UniqueUniverse https://unique-universe.blog/wp-content/uploads/2019/07/unique_universe_logo-PNG-final2.png UniqueUniverse2018-01-21 11:03:552022-04-09 14:17:57Chipsimayei - french fries omlette
Micro entrepreneurship – Hatching a better future